On Sunday at about 3:12 pm a phone call from a dear friend of mine was received. At the time it was 7:12 pm in Indonesia. “We have just had an earthquake! We are at the  Malino Resort Hotel in Gili Tangara Barat near Lombok in Indonesia. An announcement of a tidal wave warning was released and they are evacuating us to the hills. It is dark and we do not know what is happening.” This was the phone call received from my good friend and lawyer Krystallia Fasianou. I was going to Glyfada to a meeting that was arranged. At that point, I had to inform Authorities.

I got my daughter to look up the telephones and addresses of the Ministry of Foreign Affairs in Athens and The Greek Embassy in Jakarta Indonesia.  My daughter called the Ministry and they immediately contacted me to be informed. ” There has been an earthquake in Indonesia,  7 on the Richter scale and it has leveled Gili Tangara where my Lawyer is staying. She is staying at the Malino Hotel Resort. Her name is Krystallia Fasianou and this is her phone number. I have informed Australian Authorities because there are a number of Europeans and Australians there. I think my friend is the only Greek.” The lady at the Ministry thanked me for informing them and assured me that the Embassy will be contacted. She told me to inform people that they should follow the emergency procedures and that they will be assisted to safety. But how efficient were the Authorities during this emergency situation?

The good thing is that the Malin Resort Hotel had flexible wooden structure at the levels and rock foundations that kept it standing. When the earthquake occurred the staff immediately went to each room to check on the visitors and to evacuate them.

As in many situations like this panic does exist. By this stage, it was well into the night. The foreign holidaymakers were taken to a hill in foresight of a tsunami occurring. It was dark by then and many fled with the clothes they had on their back. It is important to have a small blanket to cover to maintain the body temperatures against the winds and the damp night. Waiting is what they did.

From a distance, in the very early hours of the morning, they saw that people were being loaded on the boats and destined for Bali. The boats only took local people. They did not take foreigners at the initial stages of the evacuation of the low lying islands. Through texting, I was in a close communication of everything that was going on. I immediately informed theAmbassador Hon. Mr. Mandalidis of The Greek Embassy in Jakarta Indonesia that boat evacuation was not done randomly and that a fee of 120 US dollars was requested from all the foreigners. Is this normal practice in emergency situations?

The Ambassador of Greece instantaneously contacted the Indonesian Authorities to assist Krystallia Fasianou who was left arguing with the authorities to allow the Foreigners to boat the boats and to reach Bali so that they could catch their flights. That was when they started loading foreigners onto boats so that they could reach an airport and be taken to Bali. The Ambassador of Greece had called me in Athens to inform me that extra boats were assigned and that everyone would be assisted.

Contact with Krystallia was done when she was able to charge her phone at Lombok Airport and was placed on a 4-day waiting list to fly to Bali. Once again, The Greek Ambassador Mr. Madalidis called Krystallia on her phone and requested that a seat is made available, and it did. On the plane, Krysallia noticed that there were other seats that could have taken more people. That is how Krystallia Fasianou got to Bali and is safe. We are now waiting for her to come home. 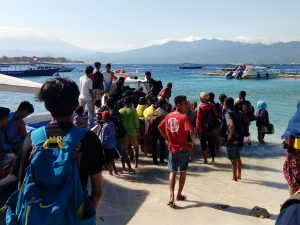 Turn off the T.V. and LOG In and enrole in the FUTURE!

The Lost generation? NOT Lost Indeed!