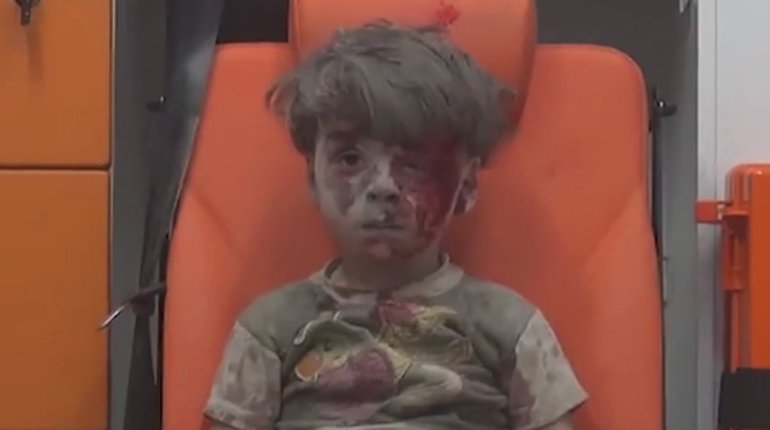 A civil war that started in 19th July 2012 and is still going as armaments pour in from its borders, supporting the Islamic rebels in the East. Meanwhile in defense government forces fight in the West in 2016.

It is also hard defending your homes and property in defense of outside insurgence.

Aleppo the second largest commercial city of Syria. Aleppo has prominent buildings industry, Universities and Archeological museums and with 2.500 million people have not left their houses. These people who are Syrians and are nothing like the foreign invading forces. These people, who were educated and not war mongers are not in a state of civil war but are being infiltrated by foreign interests. Aleppo bordering the Islamic states who have come in and captured the East holding the city under siege for a while now.

Aleppo is a UNESCO Heritage city. What is the UN doing?

In this report and video posted by “The Guardian”, as we speak. there is a boy and thousands of children not older than the age of 5 who have not seen peace since the day he was born.

Is the destruction of an ancient civilization with the bombing of its heritage sites more significant than the acquisition of oil resources and gas reserves? Do the resources of any nation only belong to that nation? Or are wars instigated so that multinational companies step in by raiding Aleppo and reducing it to rubble, allows for others to claim it? What is happening to a Nation such as Syria which has existed for thousands of years?

It has always been the raiding forces since the 20th Century that have caused genocides in those regions such as Aleppo. Or in Asia Minor in the past, that have happened such as with Greeks and Armenians in 1905-1922. Ever since some saw the wealth that existed. And of course, the sight of oil in the region just after WW1 and towards the end of WW2. These wars are wars of resources that multinationals want to gain.

These wars are no different to the ‘Economic war’ we in Greece are facing. The excess of the governments expenditure in maintaining public servants in their positions as a voting tool. In order to keep specific politicians into power. Politicians who negotiate taxation and austerity measures for the IMF and the ”Banking Lords’ behind these Macro Economic schemes.
Are small nations vulnerable to such scheming political ethics? Is it Greece’s turn next? Is this why Greece has so many refugees? Not dispersing refugees equally to other Nations so that some form of ‘foreign intervention’ is going to be needed?  Has any one thought that we are facing a ‘Crisis of Ethics’?  They buy and sell politicians in many nations, to devise policies that cause these frictions and wars.

The human race is the only species of the natural world that has put the acquisition of resources above life. ANIMALS have not done that. Humans who claim to have intelligence have.

ARTICLE: “A CALL FOR A NEW DAY~at Parliament by a Psychiatrist!”16/07/2013 A candle lit demonstration as a symbol of Hope!

Rememberence Day for RAFA at El Alimaine…and the Middle East.